In my research, I work with people who have neurological speech disorders. That is, atypical speech production that arises due to abnormalities in the brain (for example, changes in the brain associated with Parkinson’s disease). Different aspects of spoken communication can be measured in multiple ways. For example:

The last two are examples of perceptual measures. Perceptual measures can take many forms, but one method we often rely on is the use of rating scales. That is, an individual is asked to rate some aspect of their own or another person’s speech. These ratings often take the form of descriptors (e.g., poor-fair-good), numbers (e.g., 1 to 10), or a position on a line with anchors (e.g., low to high). Perceptual measures can also involve listeners making more objective judgements about what they heard, for example, being forced to choose between two similar sounds or being asked to write down what they heard a speaker say.

Many people with speech disorders find it difficult to be understood by others. In the clinical speech world, the term speech intelligibility refers to the ability of a typical listener to understand a person’s speech (Yorkston et al., 1996). This is often referred to in percentage form and provided with the context in which it was measured. For example, “Bob was 85% intelligible during his reading of a short passage” means that people who listened to Bob reading some sentences aloud were able to understand approximately 85% of what he said. That could change depending on what Bob’s doing (reading vs. having a conversation), who’s listening to him (people who know him, people who don’t), the environment (in a quiet vs. noisy environment), and many other factors.

There are a few ways we can gather speech intelligibility estimates. One way is transcription; listeners write down exactly what they heard, and their responses are compared to what was actually said. Another method is estimation; listeners rate along a scale with anchors (e.g., “low” to “high”) how intelligible a spoken utterance was to them. One type of scale is what’s called a Visual Analog Scale (VAS), which consists of a line with anchors, along which the listener makes a tick mark to indicate their response. This post is about using tools for estimation, but the next post in this series will discuss transcription.

#🛠 The search for the right tool {#tools}

In our lab, we’ve frequently presented listeners with printed forms that they mark manually as they listen to audio clips. A goal of mine this year was to come up with a system to do the same thing but through an automated, computerized system (I do love me some semi-automation). Automating this kind of task takes a big chunk out of the time required to conduct analysis, and reduces the risk of manual input error (e.g., me messing up and entering the wrong number into a spreadsheet when my eyes are going blurry from entering hundreds of other numbers). In looking into my options, I found several viable routes:

Ultimately, I chose Praat. I think all of these are great options, but in the end it came down to what was going to be the most customizable and efficient option for me. I’ve used Praat for more than a few years now, and while I recognize its pitfalls and relative weaknesses compared to other programming languages, I have a very warm spot in my heart for it. In the interest of efficiency (I’ve got less than a year left of this PhD…), I knew I could likely complete what I wanted to do in easily a third or less of the time it would take me to learn waht I needed to do in PsychoPy, MatLab, or R Shiny, and offered me more customizability than an already-built web app. The finished script can also easily be used by somebody who is not as familiar with Praat, and I may turn it into a plugin for even easier implementation one of these days. But today is not that day.

A quick sidebar on scripting in Praat

The Praat scripting language is wonderfully utiliarian, but requires you to be a fairly fluent user of Praat to know where to begin. It is also somewhat scoffed at by serious programmers because it’s a bit clunky and doesn’t align with typical coding conventions. It has, for example, been nominated as “The Worst Programming Language You Have Ever Worked With”. No disrespect intended; yes, it is clunky, but I love it dearly.

Be that as it may, if you can tame it Praat can do amazing powerful things from a script, and I use it often for automization of tasks that aren’t even related to acoustic analysis 2. There have been many recent developments in an effort to make Praat scripting more programmer-friendly. For example, Parselmouth is a Python library for Praat. I script in Praat itself for short scripts, and use a Praat syntax highlighter plugin for the Sublime Text Editor when I am working on longer scripts (perhaps another post one day about best practices in Praat scripting…).

This is a brief tutorial on using the VAS script (vas.praat).

Note: There’s no audio in the clip, but it’s demonstrating what the process would be for two audio clips.

Using the Praat demo window, the script essentially sets up an interface for the listener by defining the boundaries of the visual analog scale and “buttons”, and registers whenever the user clicks anywhere within those boundaries. If the click occurs along the line, the screen subtly updates and refreshes the mark. If the click occurs within the button to advance, the script checks whether that’s okay to do, and either advances or alerts the user as to why that can’t happen. It does all this through use use of a few core procedures, i.e., user-defined Praat functions which I’ll walk through in the next post in this series.

The code for the original core functions came during my search for any kind of Praat functionality for this kind of application. The code provided in José Joaquín Atria’s Praat scripting forum post about building a “scroll bar” proved to be the most important piece, which I was able to adapt for my purposes. The Praat forum is exceptionally helpful for finding useful code snippets in Praat and understanding more about how they work3.

In the next post, I’ll walk through the building blocks of how the VAS script works from a technical standpoint. For now, here’s what it’s like to run it.

For the script to run, the following criteria must be fulfilled:

The form defined at the beginning of the script (and is what pops up when you run the script) contains a bunch of fields for the user to fill out if they wish. 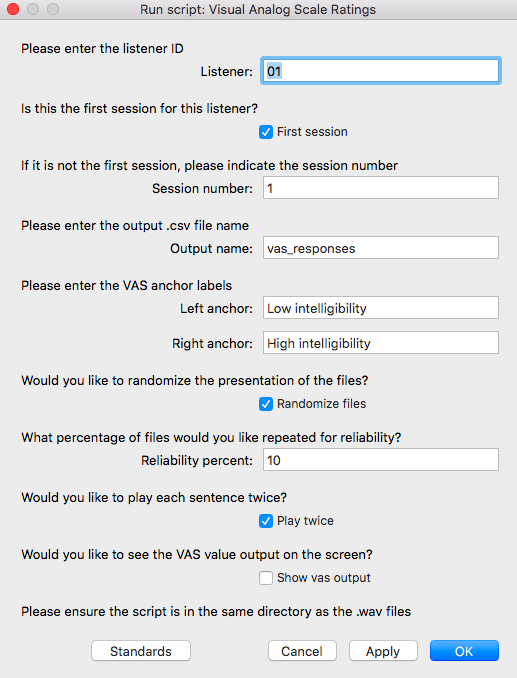 The user options can be grouped into the following categories:

Once satisfied, the user clicks Okay and the next page pops up for the listener.

At this point, the researcher may wish to pass control off to the listener. This text can be modified in the script to suit whatever the instructions are you wish to convey. Once the listener presses “Begin”, the VAS screen will appear and the audio will begin playing.

The user won’t be able to advance until they have made a mark somewhere along the scale, and the audio has finished playing. When they are finished with the last file, a pop-up informs them they’re all done.

The main output is vas_responses.csv (or whatever you’ve chosen to name the response file), and looks like this:

“percentage” refers to the percentage along the line where the user clicked for that file. In this example it refers to “percent intelligible.”

Each time you run a new listener for the first time (i.e., first session), two other files are created (the following is assuming the listener ID is 01):

Multiple sessions for a listener

If the listener needs to leave before finishing all the audio files, you can just exit the script. The next time you run that particular listener, type their same ID into the form (make sure you label it the same way, i.e., 01 or 1, etc.), uncheck “First session” and type the accurate session number into the next field.

⚠️ Important: At the present time, there’s no check built in to make sure you haven’t already run that listener. Here you just have to be diligent. Future versions will be diligent for you. It also doesn’t technically matter what you enter as a session number; all that really matters is that you have or haven’t clicked “First session”; the session number is just logged for your reference.

Outstanding additions I’d like to make but haven’t yet

Hopefully somebody somewhere finds this useful. In any case, hopefully at least future me finds it more difficult to forget what I did as a result of this and the subsequent posts in this series. We have successfully used the script for a couple of listening experiments in our lab, and I’m pretty happy with how it’s turned out. Praat is clunky, sure, but I love it anyways, and I have to say it did just fine for the task at hand (without taking years off my life to figure out 🙌)