Implementing my Twitter dashboard (i.e., finally getting to check off my more wistful to-do's)

As seems to be habit now, this post turned out a lot longer than I meant for it to. Quick links:

When I come across a tweet containing information I would like future-me to take note of, I have a rather inelegant set of strategies for making sure it stays accessible (god forbid I merely rely on remembering; if it’s not down on an externally stored list somewhere outside my brain, it will never see the light of day again): 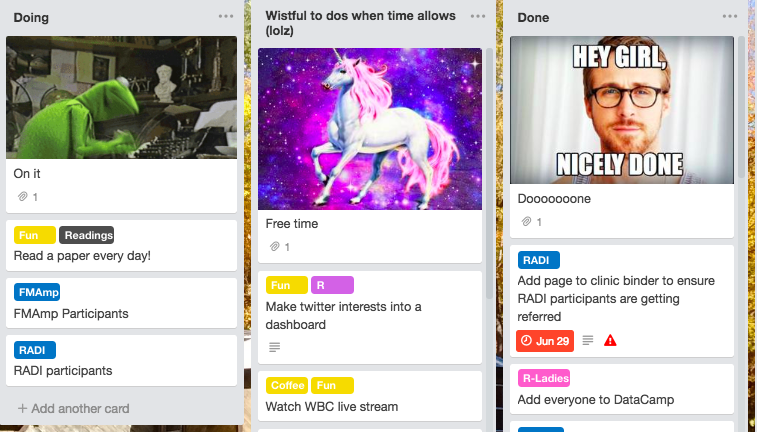 Fortunately there is rtweet, which virtually takes away all the pain associated with trying to find old tweets and scrolling through Twitter. I am still just getting the hang of it (see my previous post on using it to make wordclouds from conference hashtags), but am finding more and more ways to use it to my advantage, either for pure fun or organizational purposes.

Now, let’s be clear: I am far too Twitter-naïve and lazy to come up with useful implementations on my own, but luckily through the power of the interwebs other people are there for me and come up with genius hacks that I, too, can learn to do. One serendipitous case in point came by way of this tweet by Mara Averick, highlighting a tutorial written by Joseph Stachelek (see? two geniuses embedded in one tweet. So convenient for me to passively scroll by and click on.):

This sounded immediately appealing to me so, quickly and hackishly, I threw all of my don’t-forget-this-thing strategies at it: Liked it, RT’d it, DM’d myself it, and stuck it on my Trello board.

And there it has sat for the last 6 weeks, gathering metaphorical dust in only the ways forgotten corners of the internet can.

The “Wistful to do’s” section of my Trello board gets little love compared to the rest of it1. It has been quite a busy last couple of months, with wrapping up one study, getting another one off the ground, and completing a full-time clinical placement. So I’m not beating myself up on this at the moment. But today seemed a good day to tackle it. I had made sure to budget some time to work on fun stuff this weekend, so seemed like a good opportunity to sit on my air conditioned back porch and see if I could knock one or two things off that I’d been meaning to tackle2.

👆 Joseph Stachelek’s tutorial is excellent and I really didn’t change much at all, so go right there and check it out if you want to implement something similar for yourself.

Things I did change:

The main thing I adapted was that I used my Twitter retweets instead of my likes. I realized while putting this together that I use the like feature fairly haphazardly, and curating a list of them is no more useful than trying to scroll back through my Twitter feed (for me, anyway; maybe others are more regimented in their doling out of hearts). It’s still not a perfect system (sometimes I retweet things that I want others to see, but I don’t necessarily need to refer back to it later - for example, R-Ladies #LdnOnt info), but that’s okay.

There’s no function in rtweet (that I could find) that exclusively gets a user’s retweets, though it is simple to get all of a given user’s tweets (in this case, your own), and only include those that are either flagged as is_retweet==TRUE or is_quote==TRUE as in the following example. Here I also only selected the columns I was interested in. Namely I 1) excluded screen_name, because it would always just be me in this case, and 2) included hashtags, as I think this will ultimately be a useful variable to filter by, and 3) included retweet_text. retweet_text, it turns out, is important for the tweets that I just retweeted (and didn’t “quote”, or add my own comment to when retweeting). Turns out the text of a simple retweet will get truncated in the text variable. In order to see the full original tweet (which undoubtedly was the important piece to begin with), you have to include retweet_text. You could probably merge them together but I’m lazy and it is Good Enough for now.

I’ll probably still throw especially intriguing tutorials on my Trello board as a way to flag them, but I am very happy to now have a curated space to peruse the things I thought future-me would find useful. Saturday afternoon well spent, and a unicorn to-do finally moved over into Ryan Gosling’s very capable hands. 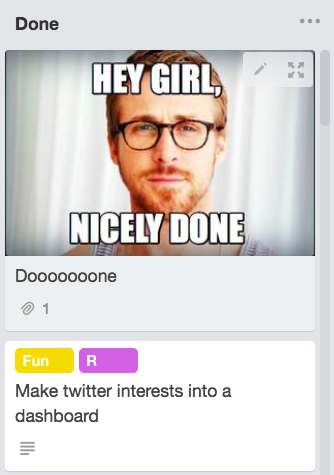